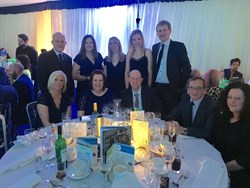 HOTA attended The Humber Renewables Awards 2018 at the Hallmark Hotel, Ferriby, on 11th May and was triumphant at the event. HOTA, not only came away winners of the Community Project award but where also finalists in Small Business of the Year and Excellence in Renewable Skills and Training awards.

CEO, Karen Shepherd, said of the award "Supporting other Charities and local community groups has always been high on HOTA's agenda.

The annual Charity Dunk has always proved very popular and, over the years, this event has helped raise thousands of pounds for both local and national Charities".

A total of nine organisations where crowned throughout the night which was hosted by TV weather presenter Emma Jesson.